Use MusicBrainz Picard to get metadata for your tracks

Accurate song title, artist, and album title are essential to your Live365 station being in compliance with licensing regulations and royalty reporting. Here is how to use MusicBrainz Picard (a free software) to ensure your MP3s are tagged correctly before uploading to your Live365 library.

Every MP3 file has a metadata (or ID3 tag) component. These text fields can be edited so that your songs display the correct artist, album, and song title when they are played on your station. Proper metadata is essential to running a legal internet radio station. Accurate metadata is how you uphold the legality of playing copyright material, and reporting track plays for royalty payments. Please see our importance of accurate metadata article for more information.

Often, your music library comes from varied sources or has been imported ("ripped") in different ways. This can result in your MP3 files having incorrect, or blank metadata. An album might be titled "Disc 2 of 2" or "Untitled Album," instead of the correct album name. Sometimes tracks will have titles such as "Track 01 - Changes.mp3," instead of just "Changes."

It is possible to update the metadata of a track after the track is uploaded to Live365, but you might find it faster to update metadata using MusicBrainz prior to uploading them to your Live365 library.

MusicBrainz is a 3rd-party open source collaborative project which links to worldwide databases of album information. It is similar to Wikipedia in that it is community-driven. You can contribute track listings, album information, and upload alternative album artwork. For example, there are 29 releases of the album Bad by Michael Jackson and each has a unique fingerprint. If you owned a release that was not already on this list, you could add it so that other collectors would be able to use the metadata set for their unique copy of this album. You can also upload a scan of the liner notes or album insert artwork to help improve MusicBrainz for future users.

MusicBrainz Picard is a 3rd-party application that connects the media folders on your computer to the MusicBrainz database. It will scan your MP3 library and attempt to identify the tracks, and then automatically fill in all of the metadata fields. There are 3 primary features of MusicBrainz Picard:

Here is a guide on how to get your tracks tagged and sorted quickly:
Set 1: Download and install a copy of MusicBrainz.

Download a copy of MusicBrainz Picard here.
Picard is available for Windows, Mac, and Linux.

Step 2: Configure the MusicBrainz settings to your liking.

There are some settings you can choose to configure so that Picard acts in a way you'd like (naming conventions, default directory, etc). This walk-through will show you the basics. It is a powerful program and it is advised that you test things out before renaming your master music collection.

For this example, we will work with a folder of tracks we believe to be by David Bowie. They were in an unsorted folder and we want to cluster the files together if they belong to the same album, get the right metadata for each track, rename the files, and move them to a new sorted directory. Here is an image of the original unsorted folder:

The file names are inconsistent, some track numbers and contributing artists fields are missing, and most of the album names are blank. These tracks will not meet compliance for legal internet streaming.

Step 4: Drag the folder containing the poorly labeled MP3s into the second pane in MusicBrainz.

The interface of MusicBrainz has 3 panes. The pane on the left navigates the folders on your computer. Here in MusicBrainz, we have navigated to the folder, and we have dragged the folder over to the middle pane:

The tracks in the middle pane are the tracks that will be examined by MusicBrainz.

When we click on the "Cluster" button, MusicBrainz will attempt to group the tracks together into albums. The results will vary depending on the tracks being examined and the available database information from MusicBrainz. 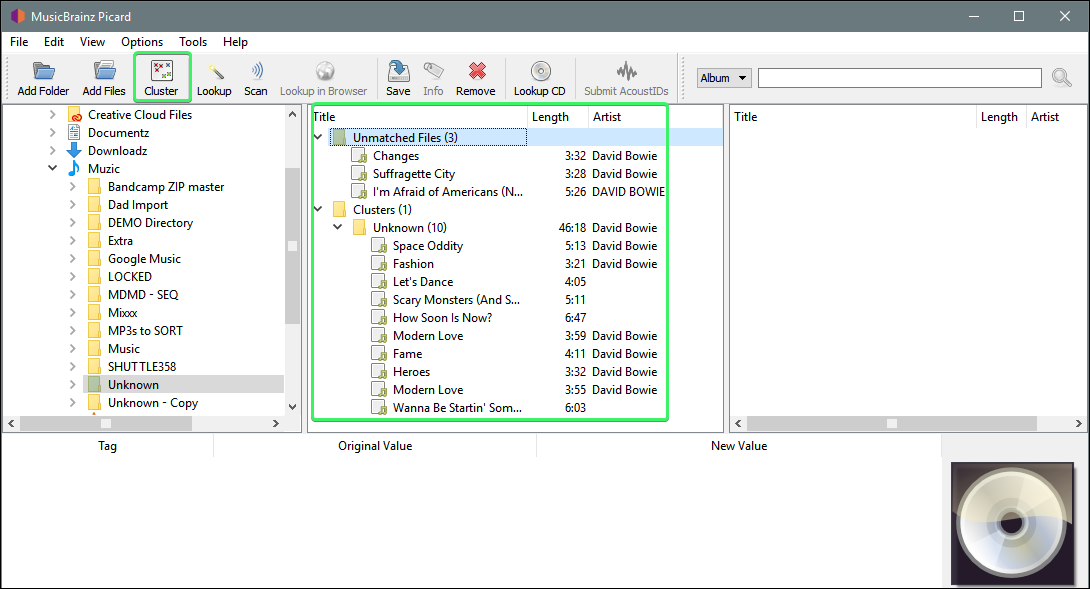 You will find the "Lookup" button next to the "Cluster" button. The Lookup feature will examine the tracks. As it goes through the tracks, we will start seeing the results of metadata database queries show up in the 3rd pane: 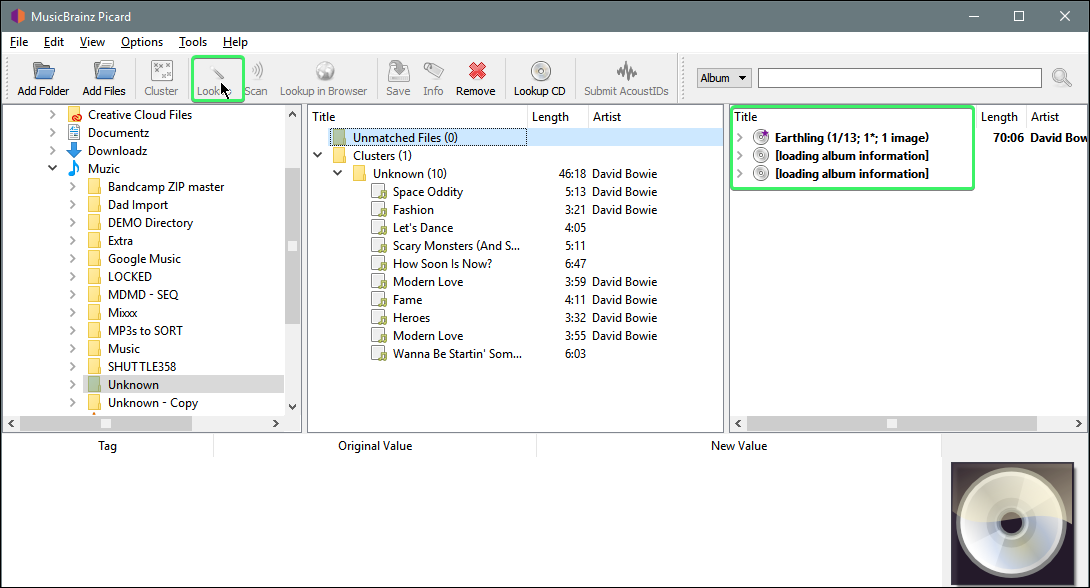 The Lookup feature resulted in 3 albums identified in the 3rd pane, and 10 tracks still left in the Unknown folder.

To identify the unknown tracks, we click on the "Scan" button. The tracks are "listened to" using AcoustID feature and compared to the database combining the sound of the track with the known metadata, length, and other context clues. 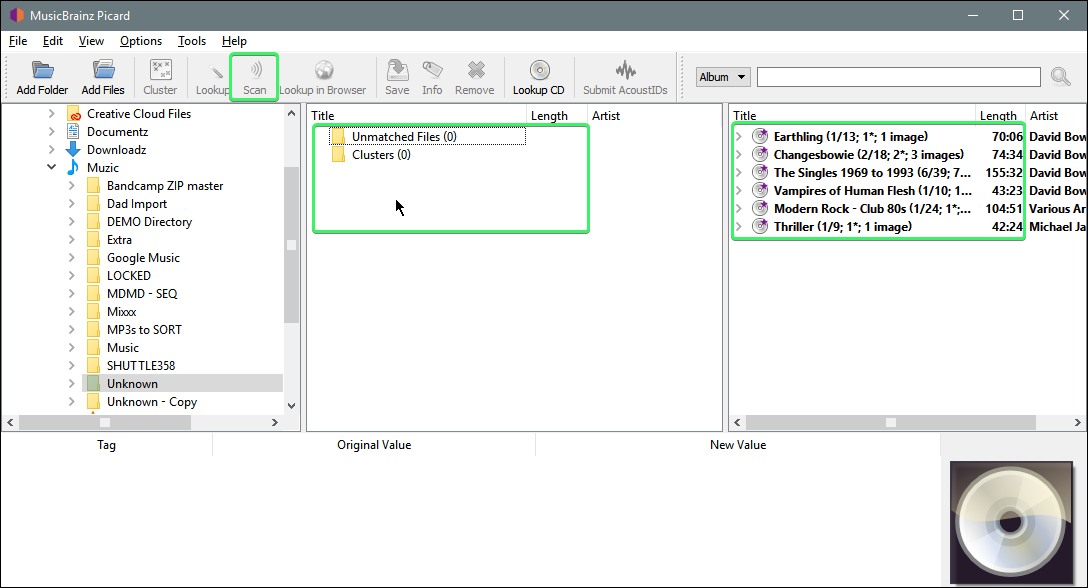 Now all of our tracks have been identified and sorted into the 3rd (on the right) pane and the middle pane is empty. The unsorted tracks are now categorized as albums. As you can see, the workflow is to Cluster first, then Lookup, and Scan last.

Step 8: Double-check the results with your own knowledge.

Next, we need to inspect each album to see what the program has identified and decide if we agree with the changes. This step is critical, because while MusicBrainz is great, it doesn't always get it right. If any of the suggestions look incorrect to you, now is the time to delete the track from the 3rd pane. You can work with the incorrect tracks after you accept the changes to the current batch. Here is what MusicBrainz Picard has suggested for our mixed up David Bowie folder:

Two of the tracks were correctly identified. The green bar next to each track indicates that the program found the best possible match. A yellow or red bar would indicate further human intervention is required.

In a different album, we see that we had 2 copies of the same song but with different metadata or information. We can see what the difference is between both versions of "Modern Love" by selecting them both (control-click) and looking at the bottom pane: 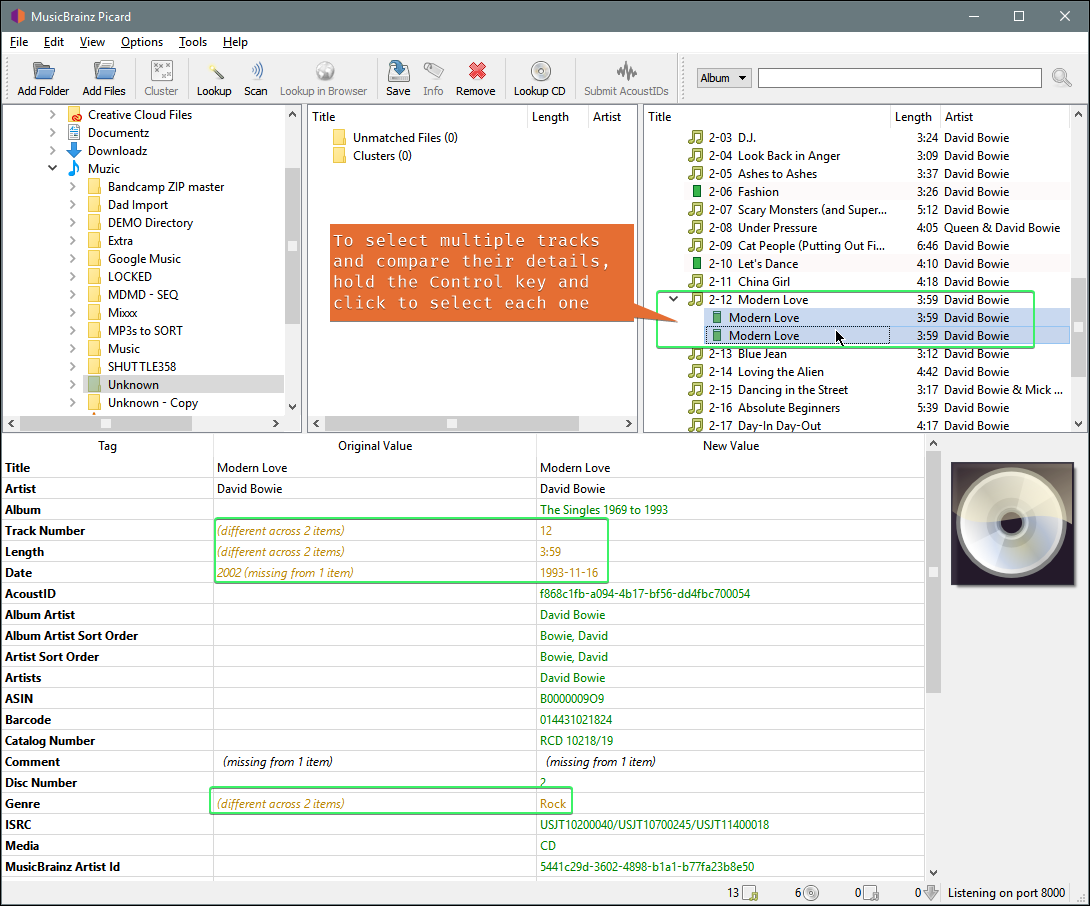 The track number and length varies between the two tracks. One is missing "2002" from the date field. We know that this collection was published in 1993, so the file with 2002 is probably an impostor and we want the original version. Before committing changes, we remove the track dated 2002 because it is from a different album and might be of a lower quality. Otherwise, MusicBrainz might keep both files.

How you proceed is up to you, and is beyond the scope of this demo. A serious collector may investigate the reason for these 2 files and then choose which they want to accept into their library. A live or re-released CD, for example, will have tracks with the same name as the original album. A wrong decision here might mean that the collectors edition tracks get merged with the live CD. For the purpose of this demo, we'll just delete one of them, so that we don't have a duplicate.

One of our sorted results turned up a surprise! We had a track from The Smiths in our David Bowie folder. MusicBrainz Picard looked it up and got the right metadata for it. Additionally, the audio fingerprint of "How Soon is Now?" shows that this specific track was released as part of a 1980's compilation called Modern Rock - Club 80's. 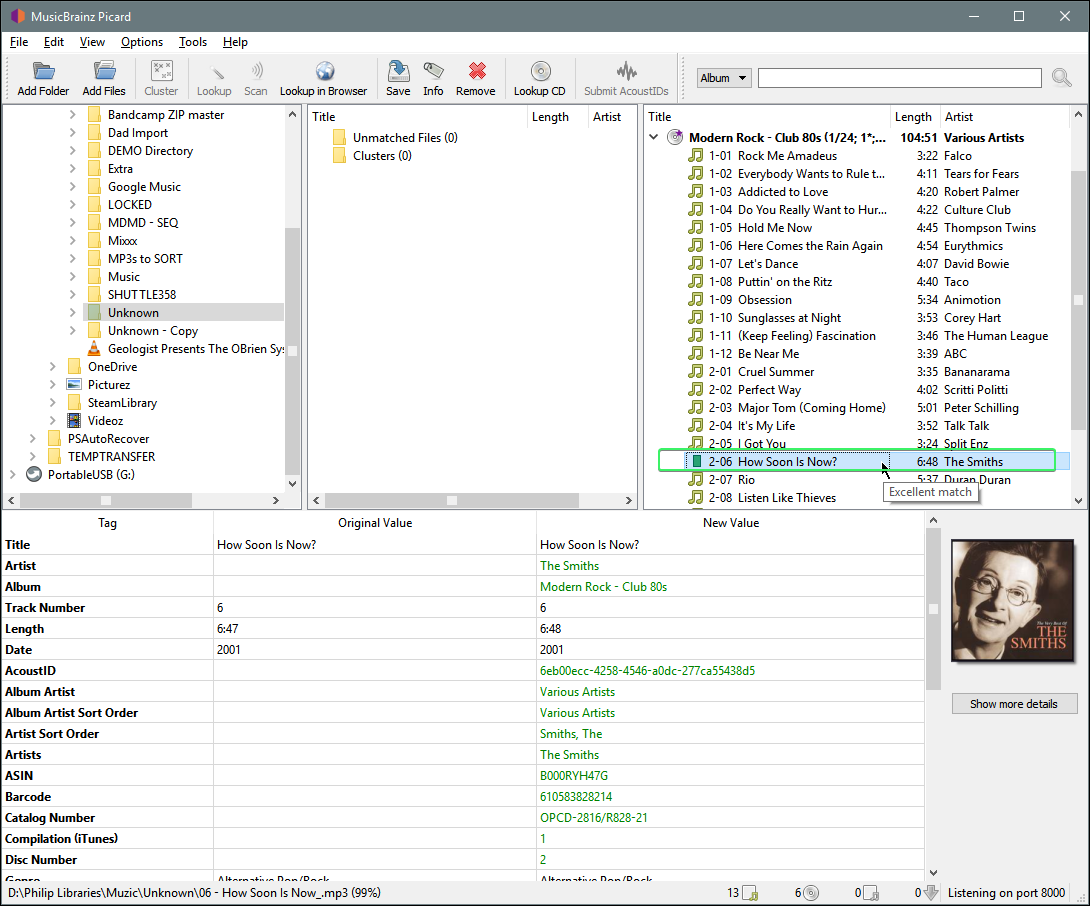 This is just a example of how powerful MusicBrainz Picard can be. It could have identified this track as coming from an album by The Smiths, but it has subtle characteristics which make it different from the official album release. It knows this is not the official release of the original album, and respects the integrity of your collection by tagging it with the correct metadata. This will be represented when we commit the changes to the files and a new directory for this compilation album will be created.

Once you have accepted the changes that are being suggested, right-click on each album in the 3rd pane and select the "Save" option. 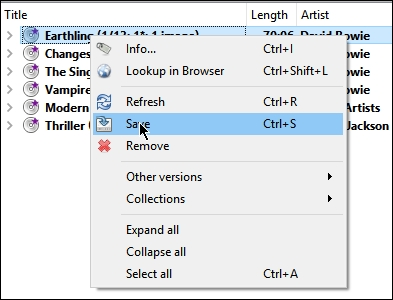 This writes the queried metadata and artwork to the MP3 files given the settings you have setup. This will also sort and move the files out of their current folder to the folder that you have designated in step 2, above. You should configure this to be your master music library so that the sorted files are integrated into your collection.

When the album and tracks are saved, the * (purple asterisk) will disappear and green check marks appear next to the tracks with changes committed. The yellow music notes are tracks that were not present for this scan. 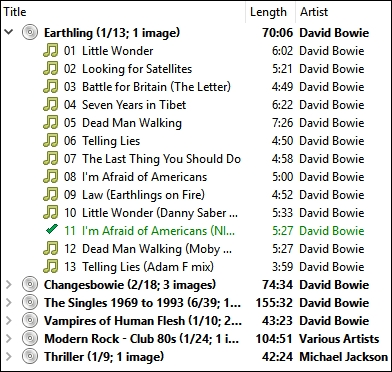 MusicBrainz Picard has moved the files from their original unsorted folder into a directory with \Artist\Album hierarchy, and we can see that the files have been renamed using a consistent standard. The updated tracks are now ready to be uploaded to your Live365 library.

This article is just a broad overview of what MusicBrainz Picard can do for your music library. Cleaning up a music library can be a lot of work, but is very rewarding at the end. Your station will be in compliance and your listeners will have a better experience on your station.

We suggest the following guidelines:

We hope you find this tool and tutorial useful in organizing and "cleaning up" your music library. Live365 is not affiliated with MusicBrainz Picard. If you have further questions about MusicBrainz Picard, we suggest that you check out their FAQs. You will find that it is a much more enjoyable experience to have all of your artists and albums organized. And, your audience will appreciate seeing the artwork and correct song titles on your Live365 station.