The Crossfade settings screen on your Station Menu lets you have more control over the crossfade transitions between your Music and Talk tracks.

First, make sure you are editing the station where you want to make these changes. Highlight and click the station name to select it. 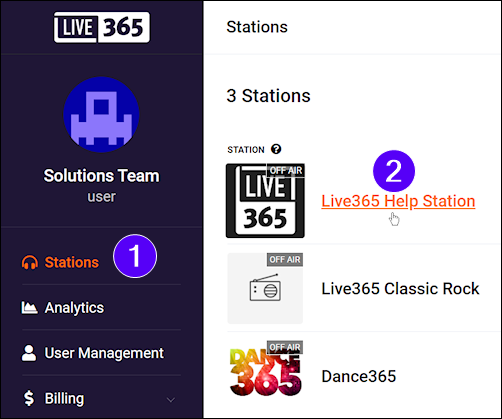 If you are unfamiliar with how to navigate this part of Live365, please see this help article which describes dashboard navigation.

To edit your crossfade settings, click Sources -> AutoDJ from the Station Menu as indicated below.

Next, select "Crossfade"  from the "Sources -> AutoDJ Settings" screen. 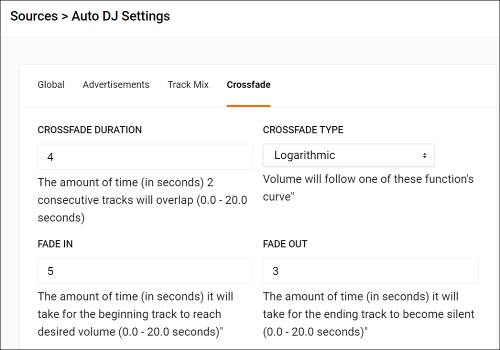 The following steps will allow you to adjust the Crossfade Duration, Type, Fade In, & Fade Out. 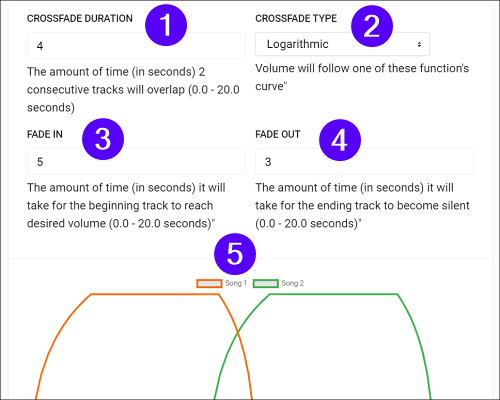 In the example image, "Crossfade" duration is set to 4 seconds. The "Fade In" is 5 seconds and "Fade Out" is set to 3 seconds using the "Logarithmic" type.

The crossfade duration is the amount of time (in seconds) that two consecutive tracks will overlap. The duration can range from 0 seconds to 20 seconds. 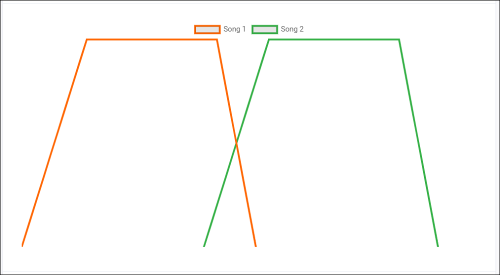 A linear fade is basic and straightforward. Linear describes the straight line appearance of the fade when visualized graphically. It applies a fade to the outgoing track so that the volume goes from the original amplitude to complete silence. The graphic will show the fade as a straight line from the full volume level of the outgoing track all the way down to silence, and from silence up to the full volume level of the incoming track. The volume levels fall or rise at a constant rate. 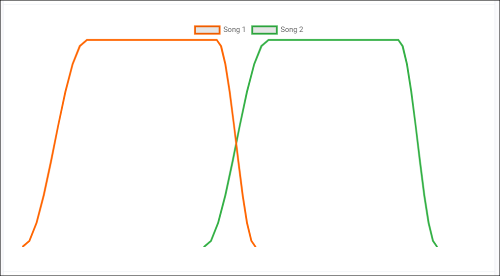 The sine fade is often used for fading out music since it produces a smoother, more musical sounding fade out compared to a linear fade. A sine fade is based on the sine wave, which smoothly moves above and below the equilibrium when visualized graphically. Similar to linear fades, sine fades avoid the possibility of the peak volume level increasing during the crossfade. You can expect that a sine fade will bring the full volume level of the outgoing track down to silence, and from silence up to the full volume level of the incoming track, but the volume increase and decrease will not be as noticeably drastic as with the linear fade. 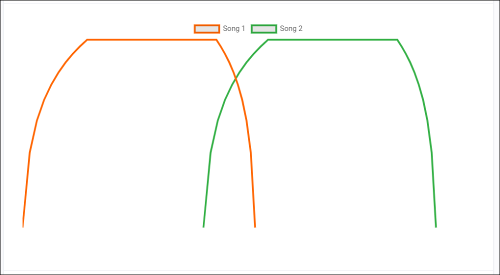 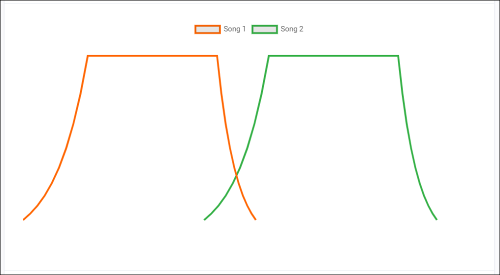 The exponential fade is also known as an “audio taper,” and you can see this in its graphical representation. Some might refer to it as a “reverse logarithmic” fade. It’s extremely popular because it is very similar to how sounds naturally decay. An exponential fade sounds smooth, even, and consistent, and this is because the perceived volume increases over the crossfade duration. Exponential fades are often used between regular songs, and some say they are best used on a long fade-out (due to the fact that the fade has a perceived linear nature). An exponential fade-in and fade-out curve sounds very natural. When this curve is applied, the perceived volume of the fade’s midpoint is at about 50% of the maximum – and when the two sections are summed then the output volume is fairly constant.

The fade in is the amount of time (in seconds) that it will take for the upcoming track (second track of the two consecutive tracks) to reach the desired volume. The fade in can range from 0 seconds to 20 seconds.

The fade out is the amount of time (in seconds) that it will take for the currently playing track (first track of the two consecutive tracks) to silence. The fade in can range from 0 seconds to 20 seconds. 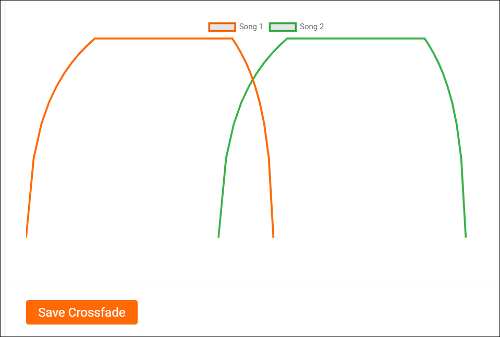 The graphic above is a visual representation of the parameters used to control crossfading on your station. As you change each of the parameters listed above, the graphic will refresh to show you the adjustments that you just made. This makes adjusting the different aspects of the crossfades quite explanatory. You can easily experiment with a range of settings for each parameter and see how it would affect the way that two songs interact with each other.

Depending on your Fade In and Fade Out settings, the length of the overall fade effect might be perceived as being longer than how you have configured the Crossfade Duration.

Don’t forget to save your changes by clicking the orange "Save Crossfade" button before leaving! Just as with the rest of your Live365 station menu, you should not use the Backward or Forward buttons of your web browser. Look for that Save button on every page after you’ve made edits.